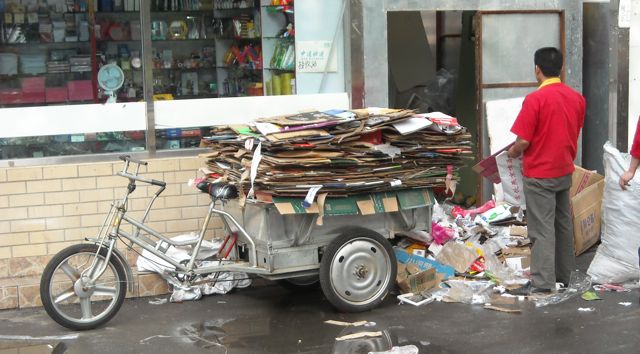 The disaster in the Gulf is more than a freakish instance of bad luck. It is an arresting illustration of a larger, quiet genocide. As I write I am in Beijing, where very early every morning the sound of jackhammers wakens me. New skyscrapers push upward daily, their tops quickly obscured by the hanging pollution. I walk along the banks of a canal once famous for its beauty and clear water. On one side of the waterway is a landscaped park. On the other side is a mega-city skyline. A bilingual plaque touts the park as a marvelous illustration of harmony between urban development and preserved natural beauty. What the plaque does not mention is that the stench from the septic canal is so strong that I can only breath through my mouth to avoid nausea. The rhetoric is impressive, but it is false.

Which of the world’s religions is going to step up and address this global crisis? So far they have been virtually useless. The Christian faith has so many rich resources and perspectives to draw on in the cause of creation care, but sadly Christians continue to be among the worst abusers of the environment. Why is this? The late philosopher of culture Francis Schaeffer saw this coming. He detected some decades ago the real supreme deities of modern cultures and their citizens: personal peace and affluence. Everything else, even a viable future for the next generation, takes a second place to that. Think about this next time you hear a politician explain that they are very committed to environmental initiatives, as long as they do not negatively impact the economy.

Presently it seems impossible to differentiate between the environmental behavior of Christians and the practices of the host societies in which we are so uncritically enmeshed. If Christianity is going to be a global force for responsible environmental stewardship, it will require a fresh wave of spiritual renewal—one that will bring to life an army of hearts that beat in sync with the heart of the Creator God. Otherwise more than a canary is going to die. As Edward O. Wilson, a prominent biologist at Harvard University, has recently observed, it is becoming increasingly clear that “our supposed conquest of nature is, in the end, nature’s conquest of humanity.”

Please, Help Me!
Quanxi and the Image of God

One Response to The Canary in the Gulf of Mexico