The Future of Smoke Stacks 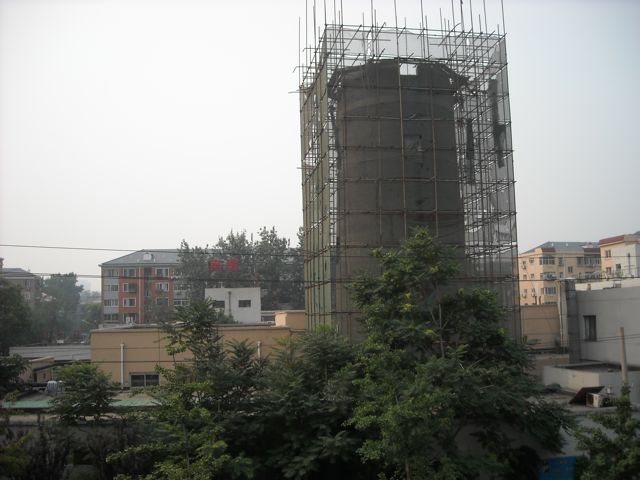 Beijing is a polluted city. Not even the spin-doctors deny that the air here is bad. On a windy day you can taste it. But upon my arrival it still came as a surprise to see a huge ten-storey industrial smoke stack right across the street from my apartment on the campus of Renmin (the People’s) University. Encased in scaffolding, workers have been banging and jack hammering on it every day. The project’s location struck me as particularly offensive—way too close to this residential university, an inappropriate site in an already-dense urban environment. And then eight weeks on I made a surprising discovery. The smoke stack is not going up; it’s actually coming down! It’s another sign that China is making a serious effort to go “green.”

China has long been an impoverished nation—rural, isolated, undeveloped, easily overrun. But its goal in the past half-century has been to become a strong, independent and prosperous nation. Outsiders may debate the means by which this has occurred, but the fact is that over 200 million Chinese have been able to climb out of poverty in the last few decades. Not so long ago Beijing itself was largely dirt roads, tough little cabbage patches, and labyrinth alleyway neighborhoods called hutongs.

The story is told that years ago Chairman Mao looked out on this undeveloped scene from his perch above Tian’anmen Square and said he had a dream that one day it would be a landscape filled with “chimneys” (that is, smokestacks)—his metaphor for a future of large-scale industrial development. Well, his dream came true, and then some.

But as a result today China is also awash in pollution of its air and water and land. The only really good news in all of this is that the Chinese government realizes that what has been happening is unsustainable, and must change. There is an enormous push, from the top down, to encourage green industry and lifestyles, and help China fix its own problems and then become a leading exporter of this new technology. It’s one of the central themes of the Shanghai World Expo. The slogan everywhere is “Greener China, Better World.” The Chinese have smelled their fetid rivers and coughed through the murky air of their industrial cities, but now they seem to be “getting it.” To paraphrase something C. S. Lewis said in a quite different context, “Pain is God’s megaphone to rouse a deaf world.”

Let’s hope the BP oil spill in the Gulf of Mexico will have a similar megaphone effect on America’s deaf ears. Hopefully a day is coming when to drive an SUV will be seen as downright unpatriotic. The reality is that we North Americans per capita are still by far the worst polluters and energy and resource consumers on the planet. Just yesterday a philosopher at Tsinghua University, one of China’s leading institutions of higher education, asked me if I had ever read E. F. Schumacher’s Small is Beautiful (1973). He had, and thought it was great. He’s passionate about ecology and suspicious of the carnage that greedy modernity is wreaking on the planet. Smoke stacks are coming down in Beijing, and some days the sky is actually blue. There are a few things that need to be dismantled in North America too if we are to leave any kind of viable and hopeful future for our grandchildren.

2 Responses to The Future of Smoke Stacks