A Visit to the Vatican 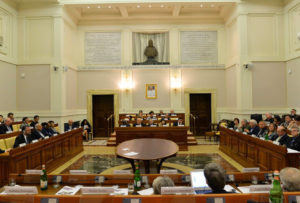 It was a great honor to be recently invited as an official observer to a conference convened by the Pontifical Academy of Sciences at the Vatican in Rome. Ever since Pope Francis’s 2015 encyclical Laudato si’ (also known as On Care for Our Common Home), the Vatican has been providing moral leadership in shaping global Christian response to the intensifying threats to a safe and sustainable planet—threats created largely by human activity and choices.

The three-day workshop (Nov. 2-4, 2017) was a follow-up to the pope’s landmark statement on creation care. It focused on air pollution and climate change (two interconnected variables), and their negative impacts on the health and well-being of humanity, particularly the world’s poorest peoples. Historically, the welfare of the poor has always been particularly close to the hearts of Christians.

The event incorporated over forty academic papers from leading scientists, prominent health care authorities, government officials, and faith leaders. It also produced a formal declaration entitled Our Planet, Our Health, Our Responsibility. The list of signatories included conference participants, a good number of whom are Nobel prize-winners. To their names were added those of other world-class scientists like Stephen Hawking, and prominent faith leaders in attendance like Leith Anderson, president of the National Association of Evangelicals in the United States.

The caliber of the participants, the superb quality of their scholarly presentations, and the earnestness with which they presented their arguments and engaged in dialogue, was truth inspirational. With careful deliberation, each presented well-documented evidence and then drew reasonable inferences and projections from it. They were able, for example, to demonstrate the great likelihood that the entire Middle East and North African region, from Morocco to Iraq, will be essentially uninhabitable by the end of this century. The geopolitical implications of just this scenario are staggering.

The participants made a compelling case that “unchecked climate change and air pollution threaten the very fabric of life on Earth,” and that the time to act is now.” And they showed how countless impoverished, vulnerable people around the world are already suffering the effects of environmental degradation, air pollution and climate change, which the global rich are relatively fire-walled from, at least for now.

A recurring theme of the conference was that no significant mitigation of our intensifying ecological crisis can be achieved without active support from the world’s faith communities and their leaders. The global consensus now is that any comprehensive solution to our ecological crisis must have a spiritual component to it. This is because it will require, to echo the late Dallas Willard, a renovation of the heart. Religions like Christianity are particularly well equipped for this, since they, more than other domains of human culture, offer inspirational visions, influence human values, and alter what we care about most beyond ourselves.

This is why many of the Vatican conference participants were both mildly surprised and exceedingly elated by the participation at the event of evangelical leader Leith Anderson, as well as Mitchell Hescox, president of the Evangelical Environmental Network. Unfortunately, there is a widespread perception today that the evangelical Protestant community is indifferent to, or even hostile toward, responsible creation care initiatives. Thus the New York Times story on the conference, released immediately upon its conclusion, highlighted evangelical participation as perhaps its most significant and promising feature.

I came away from the conference with a heightened awareness that scientists, health care providers, and government officials really do want Christians, and especially American evangelicals, to help them and stand with them in a critically important cause. What all of us do, or do not do, in this next decade could well shape the future of the world as we know it.

As Arthur Holmes famously instructed American evangelicals of the past generation, all truth is God’s truth. Responsible science, and the earnest scientists who practice it, are our friends, not our foes. The Roman Catholic church learned a rather important less with Galileo. It’s a lesson we need to be reminded of all the time.

Our positive contribution to responsible stewardship of this beautiful, fragile eco-system of our must begin by setting our own evangelical house in order—by rejecting privatized, escapist brands of ethereal spirituality, for example, and by refusing to interpret the end-times passages in the Bible in crude ways that only foster fatalism and legitimize our unchecked an unsustainable material indulgence.

I am personally grateful for the opportunity this Vatican conference afforded to expand my network of friends and collaborators beyond my evangelical silo. A number of scientists I met during and since the conference have expressed eagerness to join me in visiting churches to make presentations and lead discussions about how Christians can better fulfill our calling to care for God’s good, green earth. We will do so as Christians because in the first place we care for people, and also because we know the Creator personally, and hopefully our hearts will now beat progressively more in sync with the One who brought all this into being, and who delights in it still.