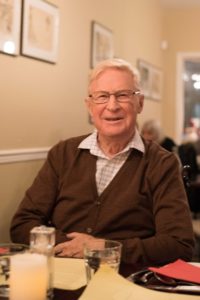 Through all of these comings and goings, Dad faithfully embodied the Christian faith he first embraced in his late teens in Toronto. Toward the end of his life, he would find himself waking early in the morning with the words of a long-forgotten hymn ringing verbatim in his mind. It was an older Scottish hymn which began, fittingly, with the words “The sands of time are sinking . . .” But Dad’s favorite stanza, the one that brought tears to his eyes, read:

That was indeed the benedictory spirit of his final days. Looking back, we treasure the memory of his 90th birthday celebration, at which the picture shown above was taken.

Next week, on July 8, a few of us will gather at the old Methodist cemetery in rural Edgar, Ontario, north of Toronto, where Dad’s remains will be buried next to Mom’s, beneath a headstone inscribed with words he chose years ago: “Heirs Together.” The inauspicious little hamlet of Edgar has been home to our relatives since their immigration from Scotland and Ireland in the mid-19th century. So many family members are buried there. It’s a quiet, verdant place. It really does feel, for all of us, like the green, green grass of home. Farewell, dear Dad, until we meet again . . . in Emmanuel’s Land.